During December 2006 the equipment in the Infants Play Area in Marple Memorial Park was destroyed by arson. Soon after the Friends of Marple Memorial Park began seeking to replace the equipment, which was sorely missed by the young children of Marple and their parents. It was decided that the bark-filled former boating pond would also have to be filled in, which increased the costs considerably.

The Friends managed to raise £3,363, approximate 10% of the total cost, through fund-raising at local events and donations from within the local community. These efforts inspired Stockport Council to make a major contribution for the balance of the project costs and the installation of new equipment was completed by early 2008.

Our brand new "Toddler's Play Area" sign has been installed for a couple of weeks. This weekend presented the first opportunity to take a photograph of it to update the web page and here it is below. The sign was created for us free of charge by Chainsaw Artist Andrew Frost in return for us allowing him to delay delivery of the Breathing Places sculpture so that he could display it at the 2008 Tatton Show. A good deal all round we thought and as usual Andrew has made a fine job of it. 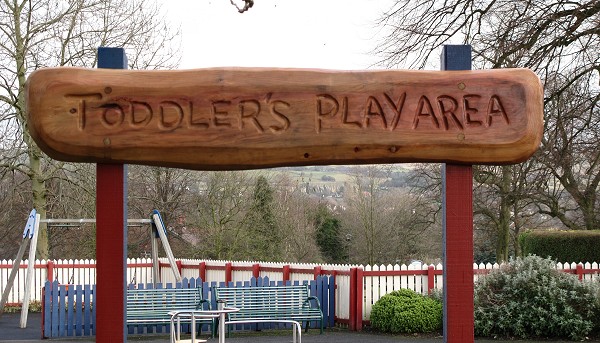 It was very pleasing to see the play area so busy during our task day today! All the equipment has now been installed and the Friends Group have paid their contribution of £3,363 raised with the help of the local community. There is still some work outstanding as the graphics on the tarmac surface are to be replaced and a blue line is to be added around the perimeter of the old boating pool.

We are also aware that the roundabout is faulty and very difficult to turn. This has been reported to Playground Maintenance and they have confirmed that it will be addressed, however, they do seem to be taking their time about it! The photographs below were taken in February and show some of the first visitors to use the new equipment.

Work has been progressing well despite the poor weather and it was good to see the equipment installed and tarmac being laid during our task day. If things continue to go well work should be completed within a couple of weeks. It's going to be great seeing the youngsters playing in there again.

The local business community has donated numerous tombola prizes to help us raise funds towards the cost of new equipment to replace that destroyed in Memorial Park by vandals last year. The generosity of the local shops and businesses listed at the bottom of this page has enabled us to hold stalls on Carnival Day, at the Locks Festival, the Food Festival, the Christmas Cracker and Marple Bridge Winter Wonderland too, raising £1,620 at these local events.

In addition, thanks to a donation of £1,000 from the Marple Website from the sale of their 2008 calendar and a contribution of £743 from Brabyns Preparatory School raised during a sponsored ‘Bounce’ by their pupils, we’ve achieved a grand total of £3,363 towards this cause. Coupled with a very generous contribution from Stockport Council it has been possible to place an order for the new equipment and the Friends are pleased to announce that installation will commence early in the New Year. 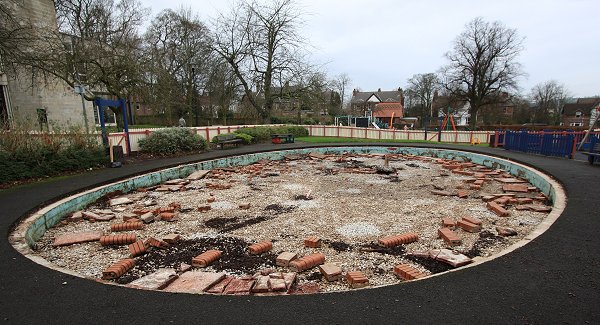 It shouldn't be long before the Play Area is transformed from the scene in this photograph taken today to one very similar to the 3D rendition below.

Unfortunately the bark filled former boating pool is no longer considered to be a suitable safe surface due to high maintenance costs and hygiene risks that were never considered when it was installed. So the installation of any new equipment needs to be accompanied by a complete new "Wet Pour" safe surface, which adds considerably to the costs.

After carrying out some consultation with users of the park earlier this year the Friends engaged Playdale, a play equipment company who provide a completely free design and consultancy service, to develop some options and prices based on the group's aspirations. The schemes produced by Playdale satisfied these aspirations admirably but revealed that a sum of just under £40,000 would be needed to fund the work. 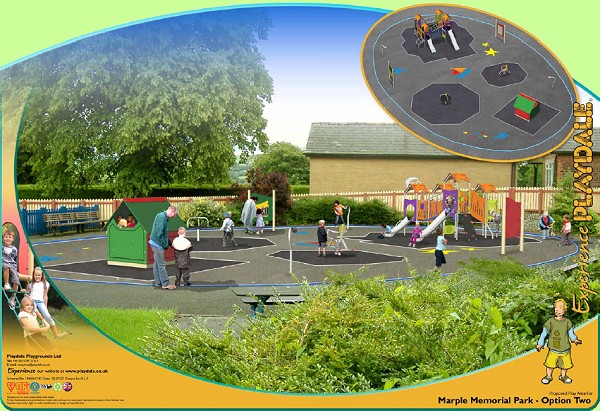 A 3d rendition of the Friends proposals for the Infants Play Area
(a close but not exact representation of the final scheme).

The Friends began raising money towards the costs at Marple Carnival and Marple Locks Festival with a tombola stall. These efforts received fantastic support from the Marple business community and many local shops and businesses donated substantial prizes with a response to our appeal for help that was way beyond our expectations. A full list of acknowledgements is included towards the bottom of this page and we thank all these local organisations for their outstanding generosity.

In addition to the Friends' efforts to raise money the Marple Website and Marple Promotions have pledged the profits from their 2008 Marple and Mellor calendar towards the cost of the new play equipment in Memorial Park. Sales of the 2006 calendar raised £1,200 towards the Iron Bridge Restoration Project and they were able to donate £500 to the Friends and £500 to Marple Locks Heritage Society from their 2007 calendar sales. Similar profits are expected from the 2008 calendar and a sum of at least £1,000 is anticipated - so please get your new calendar from local shops or the Ring o' Bells pub and help the Friends of the Park at the same time!

Despite this tremendous support it was clear that it would take the Friends a very long time to raise nearly £40,000. After an unsuccessful search for grant schemes currently accepting applications for this kind of project, the Friends approached Councillor Shan Alexander, who is the Executive Member for Leisure with responsibility for Stockport's parks. The council has responded very positively to our appeal but wish to make their own announcement regarding their contribution towards the project. Once they have done this we will add the details to this page.

The Friends continued their fund raising efforts at the recent Marple Food Festival, an excellent new event, and hope to do the same at the "Christmas Cracker", Marple Business Forum's new event planned for 1st December, and the Marple Bridge "Winter Wonderland" on December 8th, by which time we hope to have raised at least £1,000 ourselves.

We expect this page to be updated regularly over the coming weeks, so keep returning for the latest news. If you would like to help the Friends fund this project, or their many other activities aimed at improving Marple Memorial Park, we would be delighted to hear from you.

We would like to thank local shops and businesses for their generous donations of prizes for the Friends' tombolas.

Full details of businesses who have helped with support are listed on our local sponsors page.