Campaign for a new roundabout in Infants Play Area 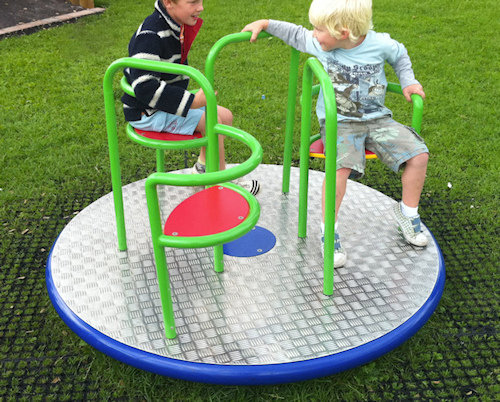 In May 2015 the roundabout in the Infants Play Area had been broken and out of service for at least 6 weeks. It had never worked properly and soon after it was installed in 2008 the Friends of Memorial Park told the council it was not fit for purpose. Many promises to rectify the situation followed over the next 2.5 years but none were fulfilled and the roundabout was now unusable and the safe surface around it getting worse every day.

Friends of the Park sought assurances from the council’s Greenspace Team that the roundabout would be replaced with a new piece of equipment but these were not received. We were told only that "Greenspace and SSK are currently reviewing priorities and spend for this financial year, this is one of the items that will be considered".

We wrote to local councillors asking for their support and they agreed to consider how new equipment could be funded at the next Marple Area Committee on 10 June 2015. In order to show councillors how important this was to the people in the local community who use the park we set up an ePetition on the council’s own web site.

In August 2015 we were pleased to report that following the public's great response to our ePetition urging the council to replace the roundabout in the Infants Play Area, a new one had been ordered and was expected to be installed in September 2015. At the same time a new synthetic carpet island will be laid around the roundabout, the multi-use climbing unit and the inclusive springer. Improvements will also be made to the safe surface in the Junior Play Area.

Thank you to everyone who signed our on-line petition asking the council to find funds to replace the roundabout. The ePetition closed with 211 signatures, which made it the second highest ever electronic only petition on the council web site and the 4th highest listed on the site altogether (including paper petitions).

The petition was presented to Local Councillors at the 10 June Area Committee. Councillors were very supportive and asked for a report on available funds.

A report was submitted to the next Area Committee Meeting on 15 July requesting approval of approximately £10,156 of new commuted sums to Marple Memorial Park. The report also showed that £8,132 has been previously allocated to the park, making a total of £18,288 available for improvements to play if the report was approved.

Unfortunately councillors had questions about the report that could not be answered because an Officer was not present. Councillors asked for the Officer to attend the next meeting on 12 August in order to answer their questions.

An Officer attended the 12 August meeting and local councillors were satisfied and approved the report.

As well as the new roundabout, both the Infants and Junior Play Areas need replacement and / or repairs to safe surfaces.

The funds now available will be used to purchase a new roundabout and to install a synthetic carpet over the existing safe surfaces around the roundabout, the multi-use climbing frame and the inclusive springer. This will create a continuous level safe surface around all 3 pieces of equipment.

The roundabout has been ordered and the work is expected to be done in September after the school holidays.

It is not planned to do the safe surface around the swings, the Wendy house or the set of 3 “springers” at this time. This is because their life expectancy is relative short and we would like to replace them with new equipment when further funds can be made available in the future.

In the Junior Play Area it has been agreed to replace the coloured sections of wet pour safe surface that have become detached from the surrounding tarmac around each piece of equipment, which should prolong the life of the Junior Play facility safe surfaces for a good number of years.

This work will also be done in September 2015 but we have asked that it is staggered with the Infants Play Area so that they are not both closed at the same time.