A busy task day in pleasant sunshine was a little marred for us today. We were very disappointed to have to fill 4 bags with dog mess from around the flowerbeds before we could make a start on maintenance.

Unfortunately over the next 15 minutes we had problems with several dog owners. The first let his two spaniels out in the car park. Full of energy, they crashed through our flowerbeds many times before one of them crapped amongst the plants. While the owner picked up, the other dog continued his running through the beds breaking off daffodils. After suggesting to the owner that he keep his dogs on a lead until past the flowerbeds, and he replied "fair point", they continued on their trail of destruction into the War Memorial Beds, where the second dog crapped. So the owner then had to walk into the bed himself to clear up while the pair of them continued to burn off energy crashing through the low hedges we planted last year.

The next one was a lady whose dog crapped near the beds but she was too busy talking on her phone to notice. When this was pointed out to her she picked up but without apology or acknowledgement or interruption of her phone conversation.

We then had another lady who allowed her dog to crap in a flowerbed and on the edge of the border. She picked up but when asked why she needed to let the dog crap on the beds because we have to kneel there to maintain them she didn't seem to understand our concerns. While this was going on her second dog, a small Jack Russell type, continued wandering happily through the beds taking no notice of her efforts to call it out. When told what we thought of this and that her dog should be under control she said she didn't like my rudeness (the word crap was used several times) and although she supported what we did in the park she wasn't sure if she could continue to do so. Well this is the kind of support we can do without!

Then just when things were calming down and we were getting back to work another owner with a dog on a long lead allowed it to wander back and forth through one of the beds. When spoken to he said "the dog was in sniffing mode"!

Thankfully things got back to normal after that and we managed to put fresh edges to all the beds, get lots of weeds out and add a selection of new plants. Work was also done to the Toilet Bed and Jubilee Bed, and the WWI silhouette at the park entrance was cleaned of the mud that someone had thrown on it. We also tidied up the mess left by the contractor around the benches at the park entrance when they replaced the York stone that had been stolen.

On a much happier note, we also continued our Little Growers scheme, which encourages young children to take home some seeds to grow and nurture before planting back in the park later in the year. This is proving very popular and we'll do it for the final time this year during the next task day on 28 April, which will also be the annual Family Treasure Hunt.

A tidy up of the Toilet Bed. 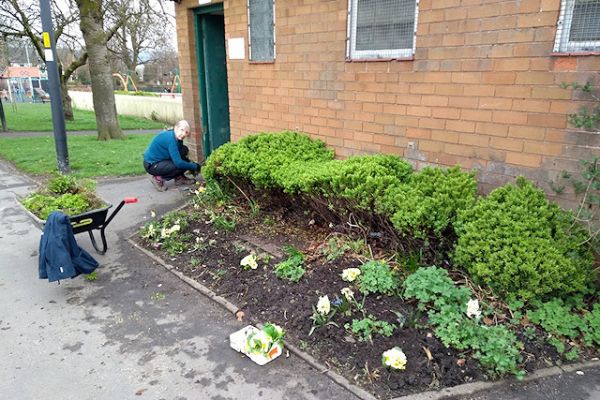 A tidy up of the Jubilee Bed. 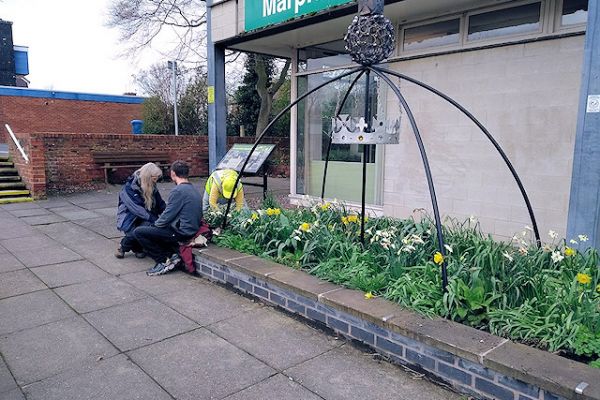 A clean-up of the WWI silhouette at the park entrance. 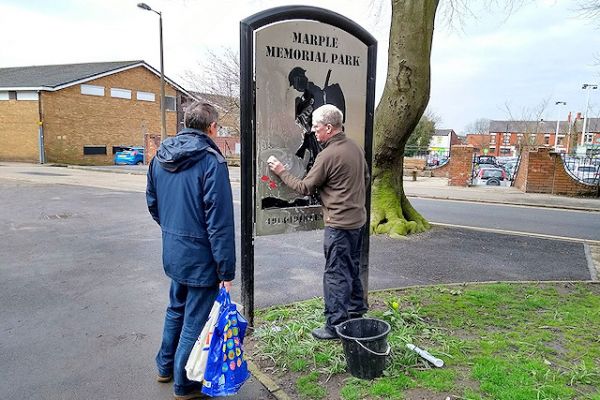 Lots of work on the main flowerbeds. 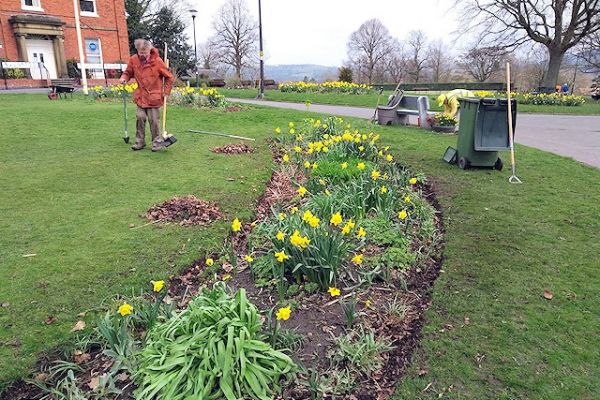 Great to have more Little Growers in the park. 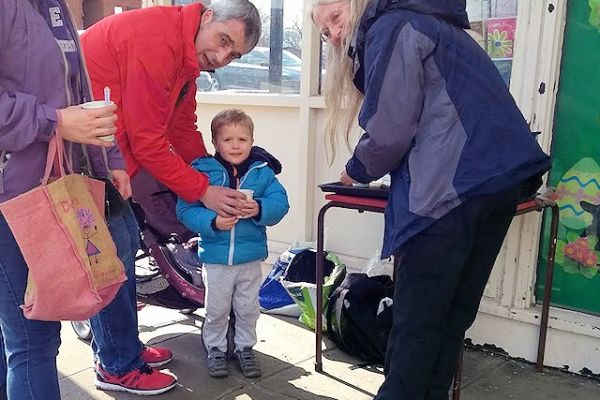 Thankfully some park visitors continued to support us by popping just over £8 in our collection bucket.

It seemed like we were heading back towards winter but plenty of volunteers braved the Easter weather.

Today we created a small flowerbed near to the Bowling Green where we plan to grow some climbers up the fencing. We also added some new soil to the Jubilee Bed, although not as much as we'd hoped because it was so wet. Luckily the allotment folk were out in force so we helped them add the rest of the soil to their beds and they dug it in with the muck spread last year.

We worked hard tidying up the Reading Circle behind the library and the Toilet bed too and of course picked lots of litter.

Today we also launched our Little Growers scheme. This is where we invite children to plant seeds, take them home to nurture and grow them and then come back to the park to re-plant them in the summer. Despite the weather this got off to a great start with 16 pots of seeds being taken home. We will be doing this for the next two task days too - 14 and 24 April.

Visitors kindly popped just over £8 in our collection bucket, so thank you to them! 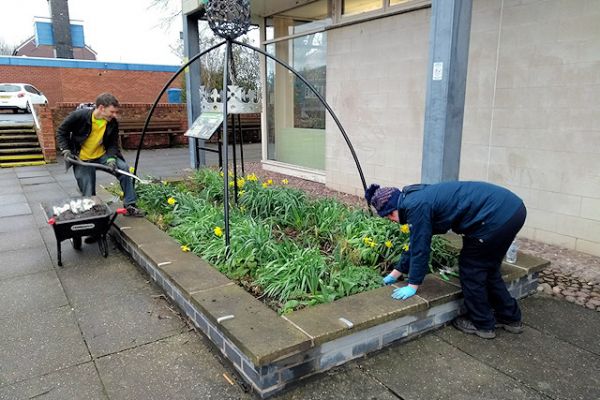 Allotment people out in force. 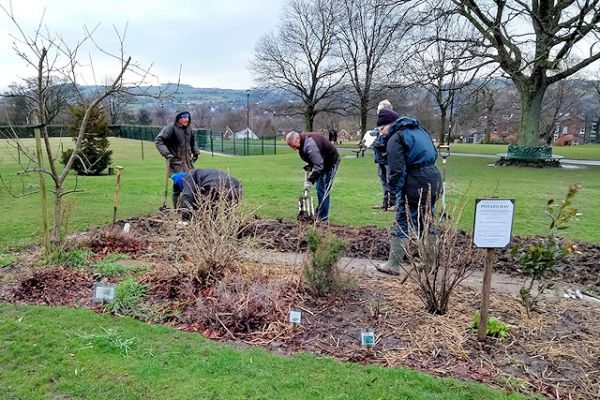 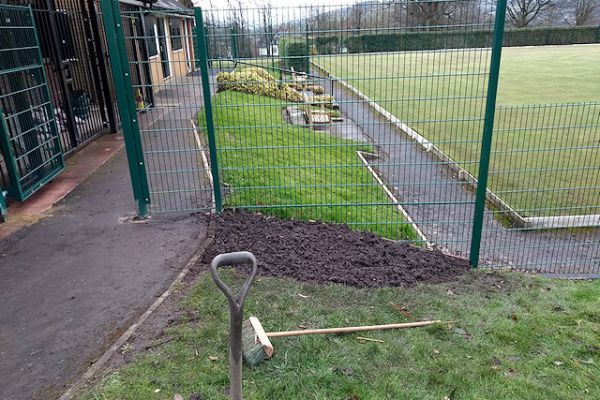 Little Growers got off to a good start. 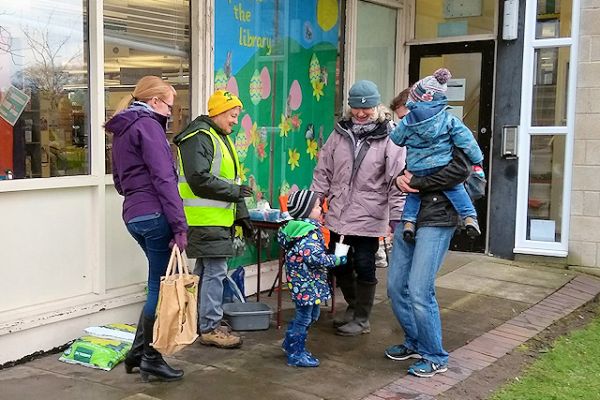 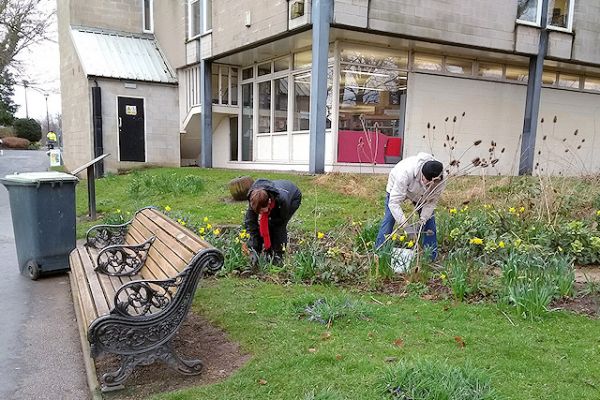 It was great to be back in the park with the sun shining, despite the bitter cold wind early on.

Today we planted another 3 large sacks of free bulbs, this time near to the new landscaping works done by the council at the skatepark. These are too late for this year but when bulbs are free and they are going to be thrown away by a garden centre then we think they're better being planted in our park. Hopefully they'll reward us with some spring colour next year.

We also had a good tidy-up of the War Memorial beds and the circular flowerbed ready for this year's new growth, removed the old chains from the benches that were relocated last year and picked a great deal of litter.

We took advantage of the sunshine to put our collection bucket out for the first time in 2018 and were rewarded with donations of just over £17 from park visitors. We also received a big bag of change from Marple Co-Op, which we haven't counted yet.

Late bulbs being planted near the skatepark. 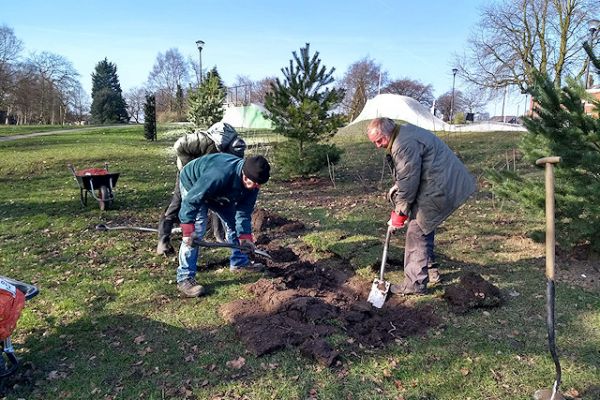 Late bulbs being planted near the skatepark. 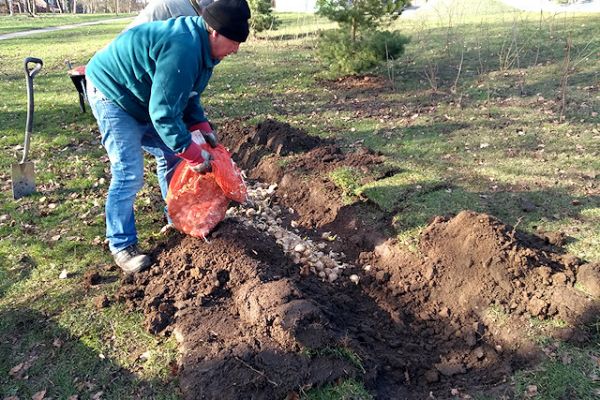 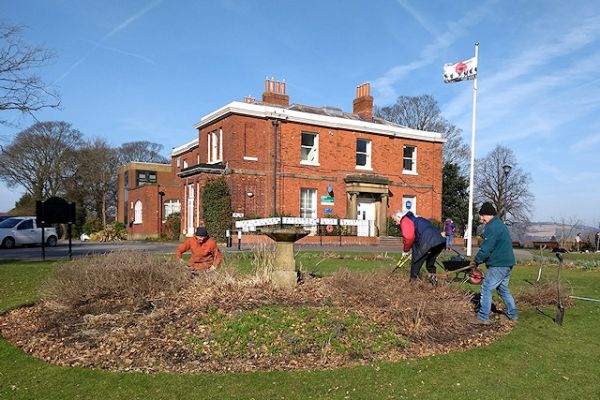 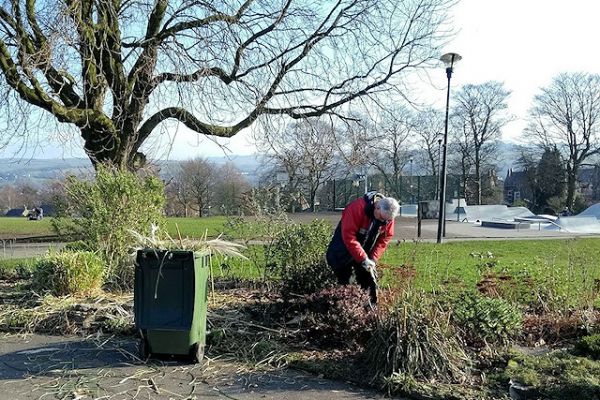 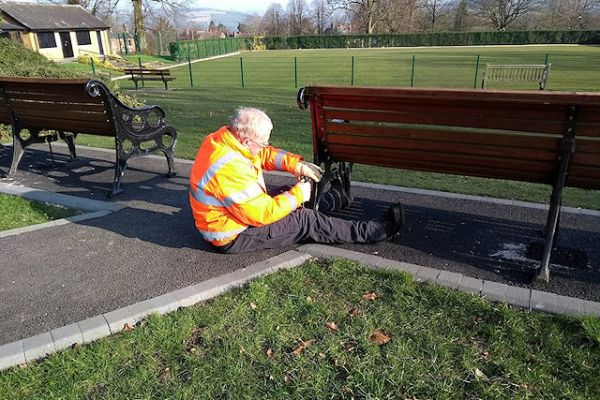 After cancelling our last two task days of 2017 due to the weather it was great to get back in the park for the first time this year.

The whole park was still very wet but we managed to weed the Boules Court, do some litter-picking, spread wood chippings a shrub bed and plant another 25Kg of daffodils. The latter was a prize won from Parker's by the Open Gardens in Marple team. These were donated to Friends of the Park and we planted them in two waves near to the Infants Play Area. They've gone in a little late so we're not sure how good a show they will put on this year but there's always next year if they don't.

We also rescued the Poppy Rocks painted by local children during Remembrance last year. The council had removed them with the wreaths from around the war memorial and they were left in bin bags, presumably for disposal. We've placed them in front of the small memorial where people leave the crosses and hopefully they can stay here if nobody interferes with them. 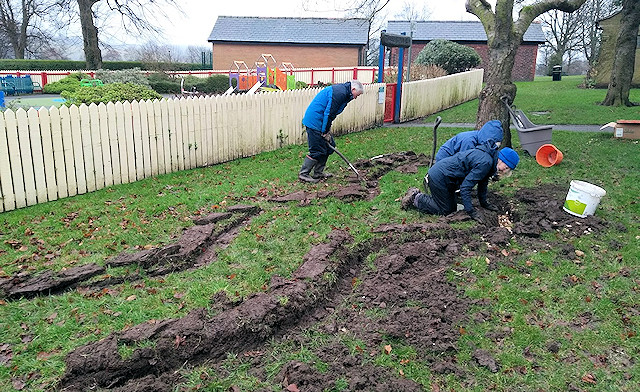 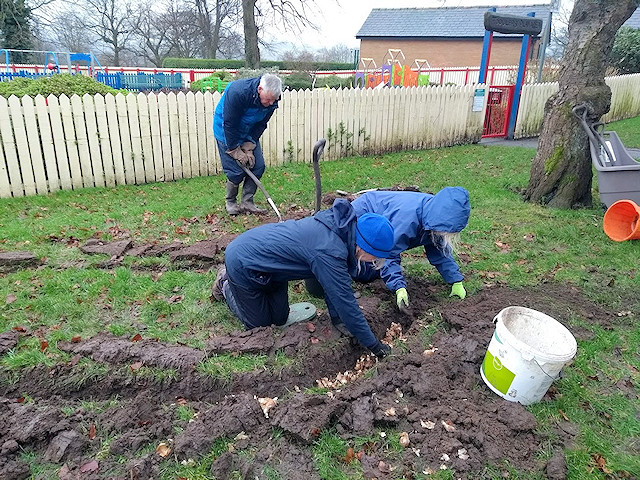 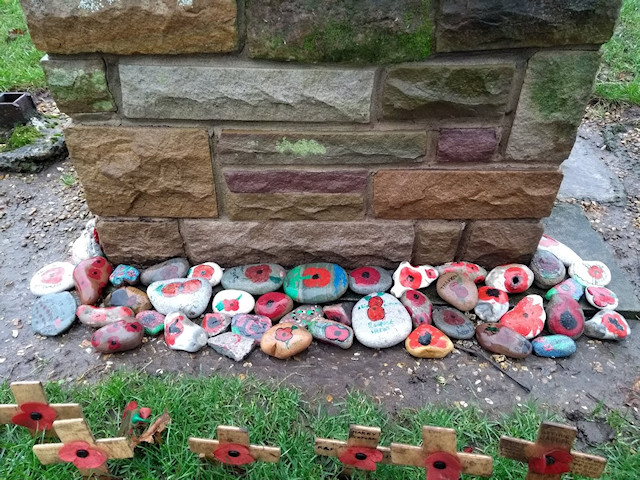