The Friends hold regular task days in the park on the last Saturday of each month in the winter and the middle and last Saturday from March to November. Everyone is welcome to join in for as long or as short they wish during the specified times. Please note that children and young people under 18 should be accompanied by a responsible adult. The next task day is:

TASK DAYS ARE CURRENTLY RESTRICTED AND AT THIS TIME WE ARE NOT RECRUITING NEW VOLUNTEERS. IF YOU ARE AN EXISTING VOLUNTEER PLEASE CHECK EMAILS FOR MORE INFO.

We like to keep a record of what we get up and here are details of past task days.

Today's efforts included a tidy up of flowerbeds front and rear of the library, litter-picking, planting bulbs, clearing leaves from the car park and driveway, clearing windfall branches from the park and even clearing the access to Asda. Several of us finished the session in Oldknow's Bar, which is becoming a new tradition and a great way to end the year.

Here's a photographic look-back over the 12 months of 2018 with Friends of the Park. 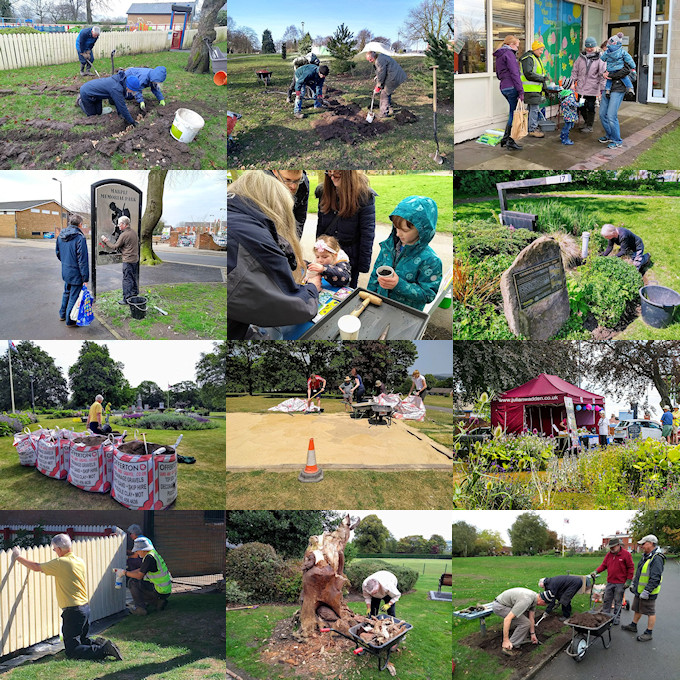 One of our volunteers' main tasks today was distributing 4 tonnes of topsoil provided by the council over the main flowerbeds, which should settle nicely after rain, frost and show over the coming winter. The other main task was planting bulbs around the benches over-looking the bowling green. There were some glitches with the camera today so a number of shots have gone missing but thankfully the one of volunteers doing a Conga over planted bulbs didn't get lost!

We also met with Andy and Tom, a couple of guys representing Forever Manchester, who came along to find out more about what we do. Forever Manchester is a charity that raises money to fund and support community activity across Greater Manchester. They've been a great support to Friends of the Park with the recent Auto Trader Community Fund grant towards the Ocean See-Saw and a CDL Fund grant and an FM Awards grant that both contributed toward the skatepark project.

This time we left some handmade cards near the War Memorial with our normal donation bucket. The cards were made by one of our volunteers and were available on an "honesty box" basis. Visitors to the park kindly left over £18 in our bucket. 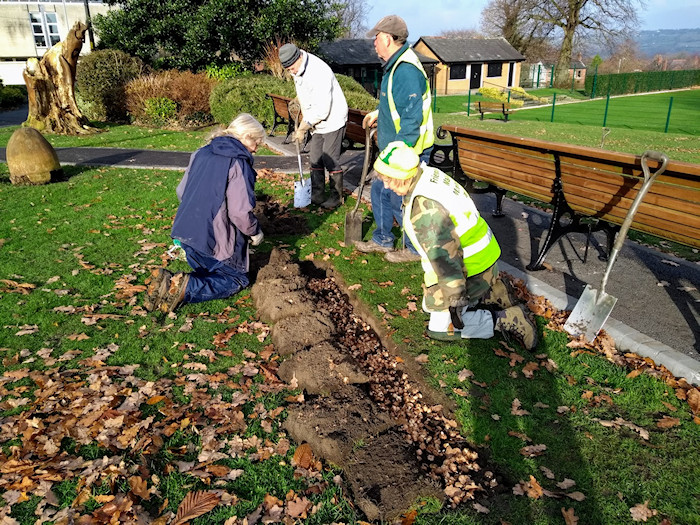 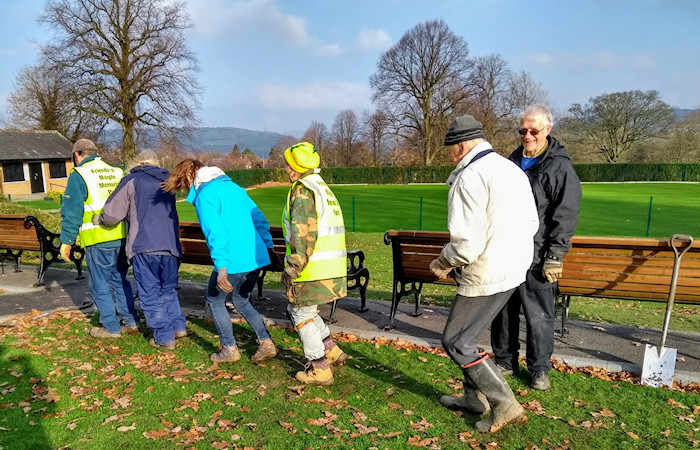 Come on do the Conga! 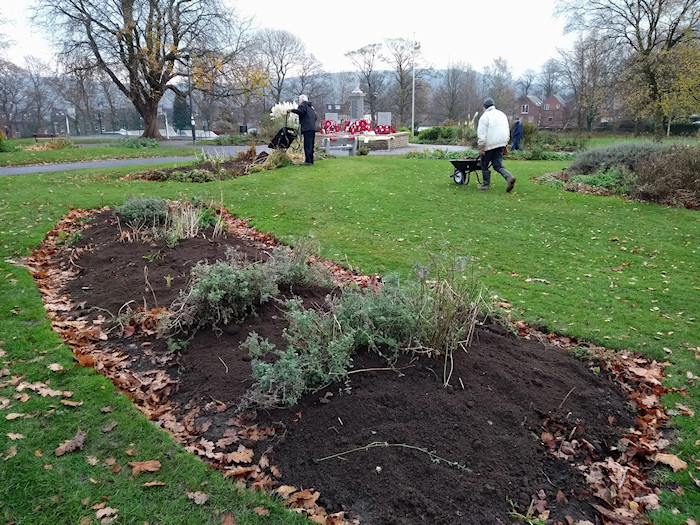 We squeezed in an extra task day last Saturday and the council has been working hard in the park all week too, so today we were able to focus on the final touches before Remembrance Sunday tomorrow.

141 knitted poppies were added to the handrails on the War Memorial, one for each man killed during WWI 100 years ago. The cobbles in front of the Timeline were cleaned, which was a tricky job with so many people coming to look at the timeline! The chain-linked railings leading up to the small memorial were checked out and painted ready for tomorrow too. there was also a good final tidy of the driveway into the park, the flowerbeds, the memorial beds and all around the memorial itself.

The Union flag was raised on the main flagpole and Poppy Rocks created by local children were set around the small memorial too. With the Timeline complete and lots of work in the park including re-tarmacking of the main paths and the area where stone was stolen from the park entrance, weeds cleared by the Payback Team and leaves blown by the park attendants, the park is as ready as it can be for the 100th anniversary of the end of the war.

The park was busy and the public were exceptionally generous with over £47 donated in our collection bucket! 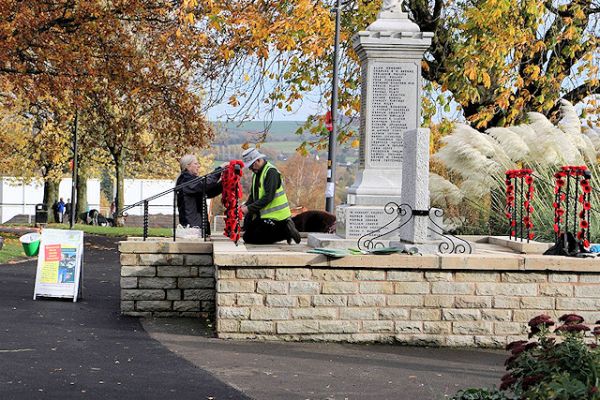 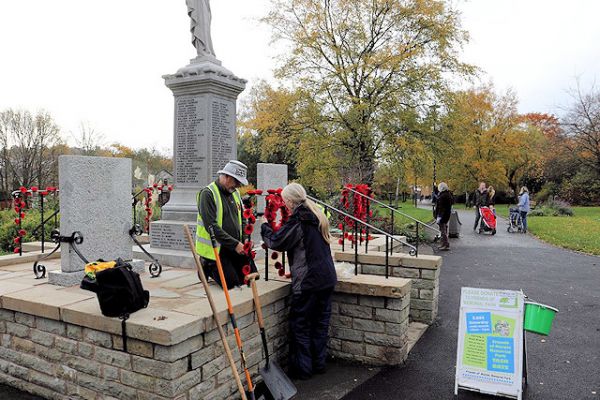 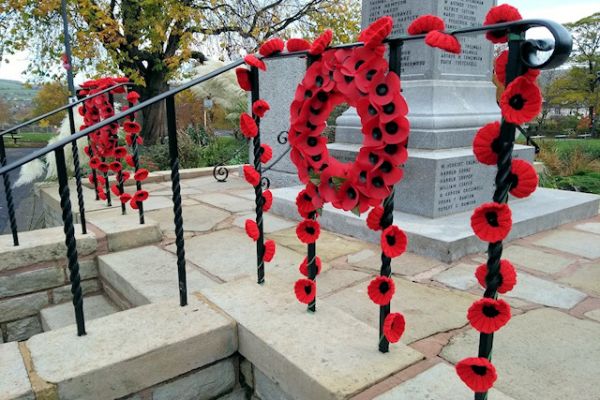 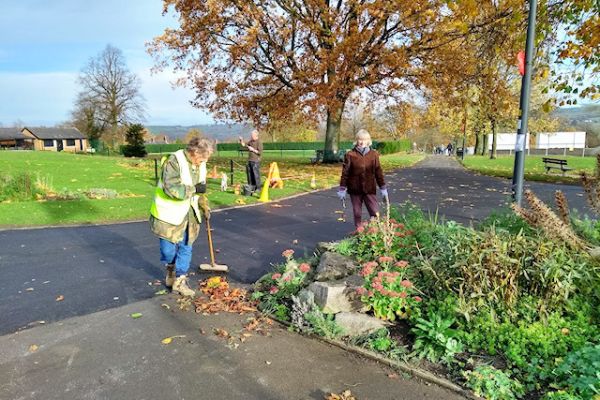 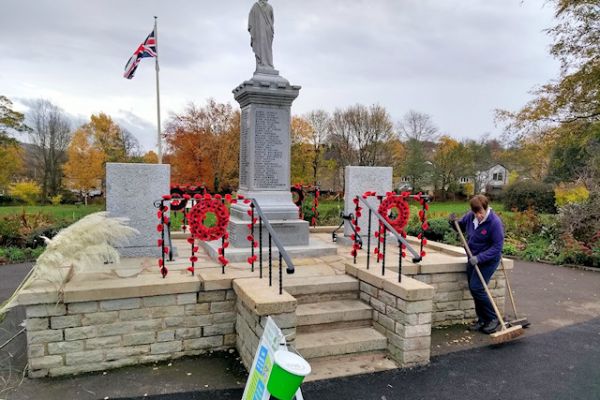 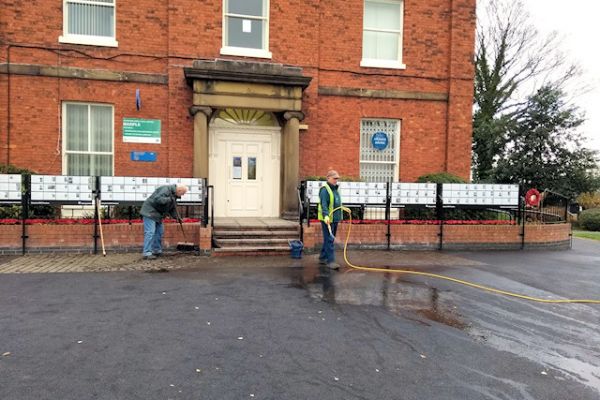 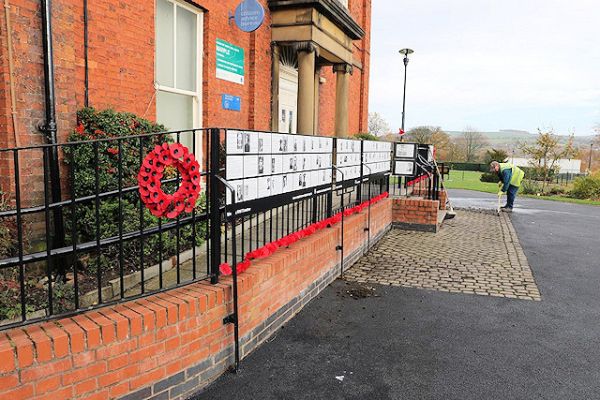 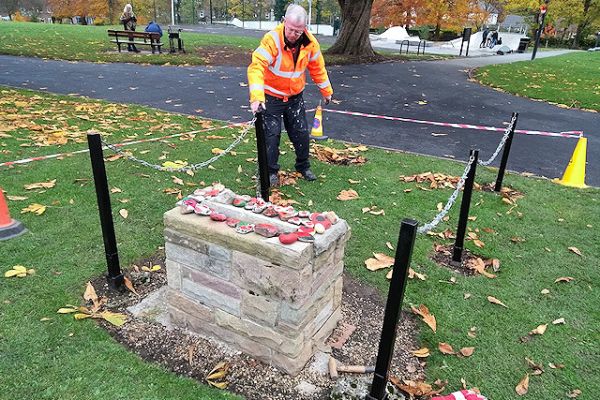 Poppy Rocks created by local children on the memorial. 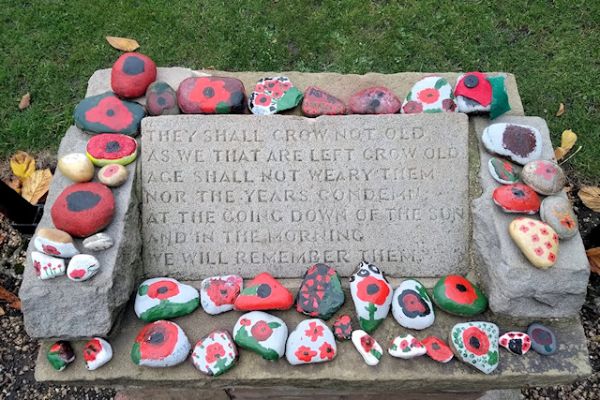 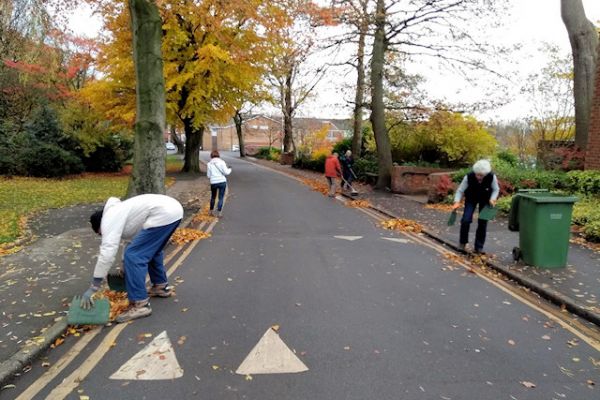 Thank you to David Burridge for several of today's photographs.

It was a bit cold today but one way to keep warm is to get stuck-in and our volunteers certainly did that!

New shrubs were planted in the toilet bed, some serious pruning was done around the council offices and there was lots of maintenance on the flowerbeds. Another big job was clearing leaves and detritus from the gutters and pathways along Memorial Park Drive. A small group of Marple Scouts and their leaders helped with this too but unfortunately they didn't have permission to photograph the kids, so we can't show them joining in.

We also had the annual clear-out of our tool store, painted the chains at the park entrances and picked litter too. 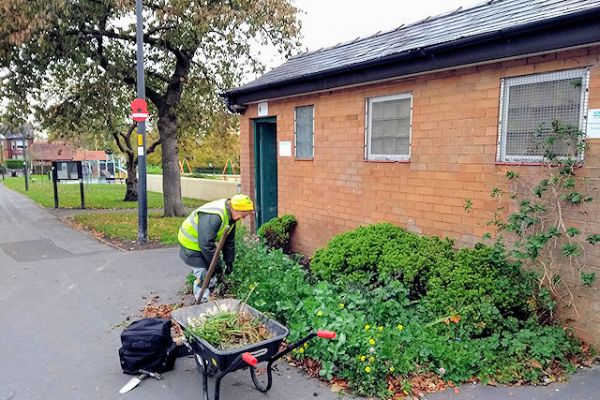 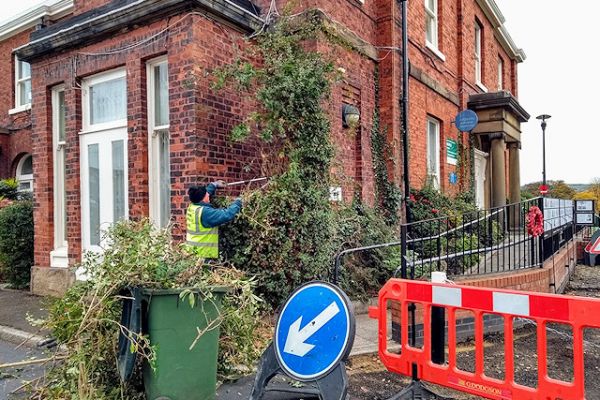 Lots of work on the flowerbeds. 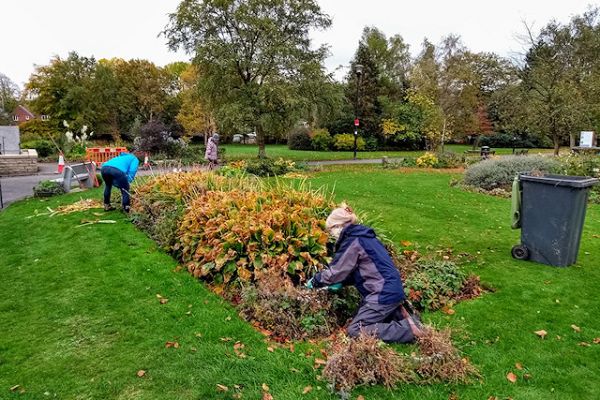 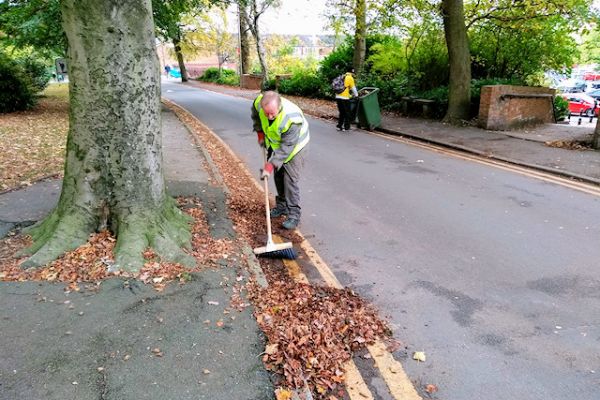 A before and after on Memorial Park Drive. 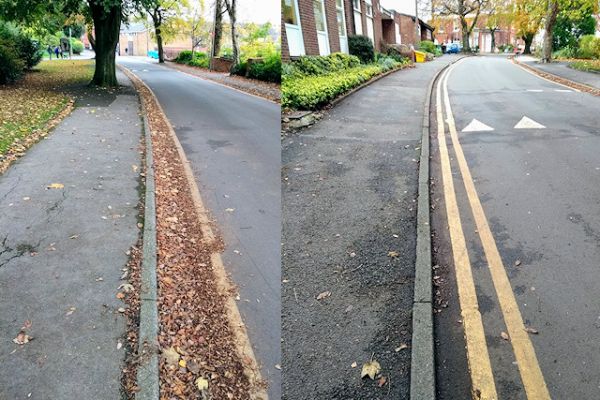 The public showed great support for what we do again, with just over £17 donated in our collection bucket plus a £40 donation made by a very generous gentleman who loves what we do in the park. Thank you!

After a very windy night thanks to Storm Callum, we spent much of the day clearing up fallen branches from the park, including one that had damaged a fence down near the canal. We'll repair the fence soon. It was still pretty windy in the park so, so we also focused on pruning in the Bandroom Garden, where it was a bit more sheltered. We also managed to strip some nettles behind the library and install the last set of paving slabs in front of the skatepark benches. 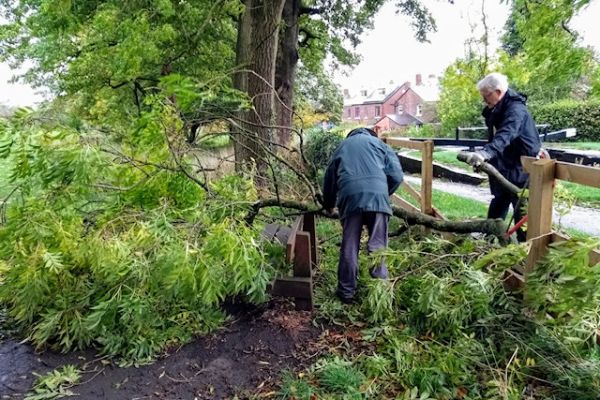 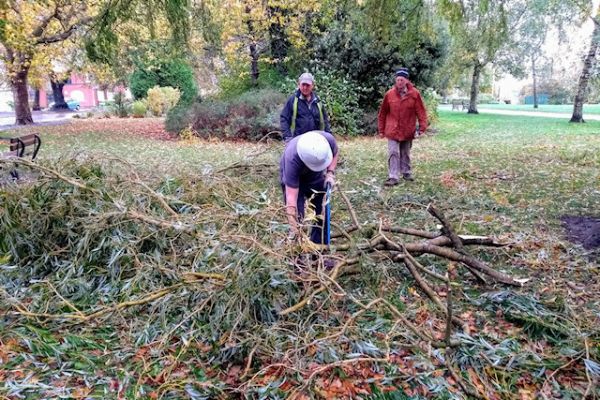 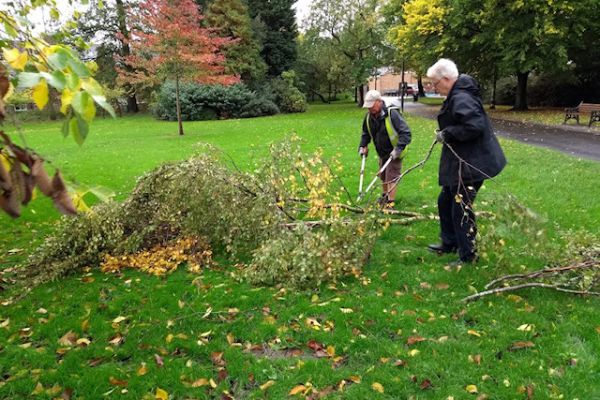 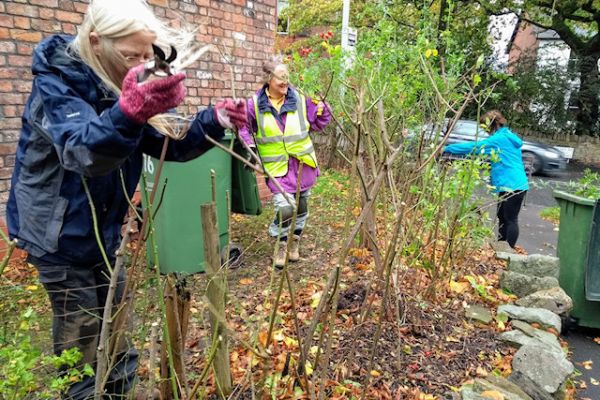 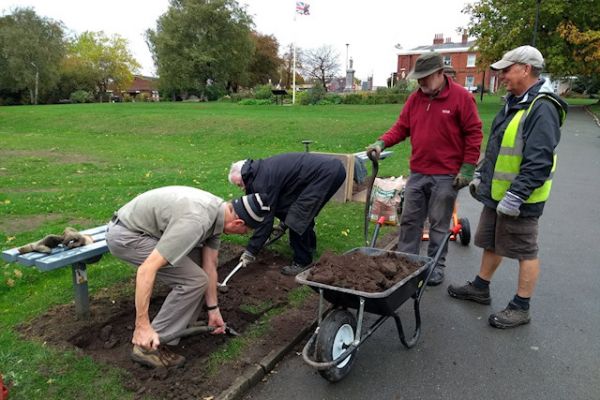 A glorious Indian summer day saw Friends of the Park focusing mainly on the beds alongside the offices and the car park, which were long overdue a good tidy-up.

We also added paving slabs to another of the skatepark benches to create a hard-standing to keep the mud off peoples' feet. We ventured outside of the park again to complete the painting of Lock 17 and while we had the paint out it seemed a good idea to do a bit of touching up in the park too.

We like to keep on top of Lock 17 as it was our project. 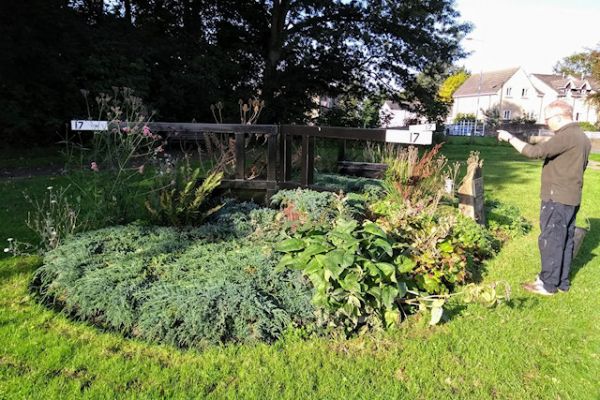 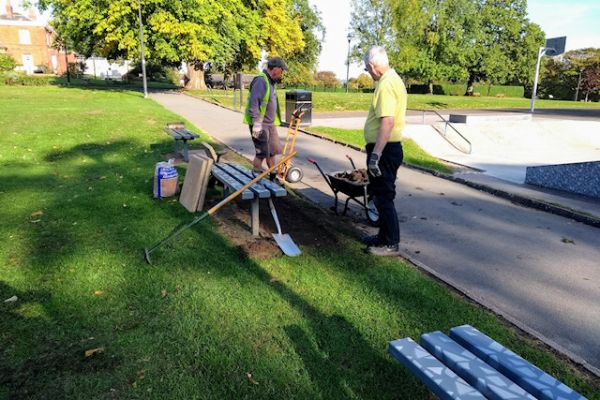 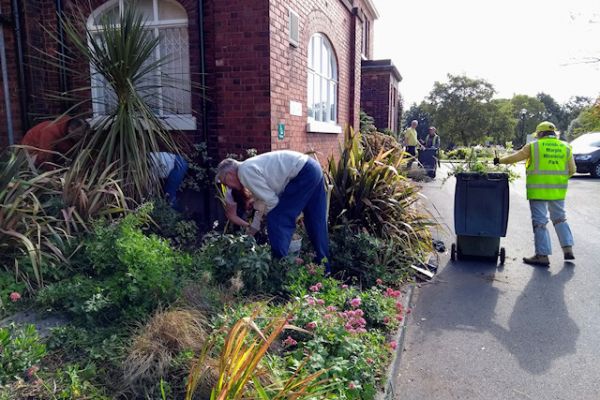 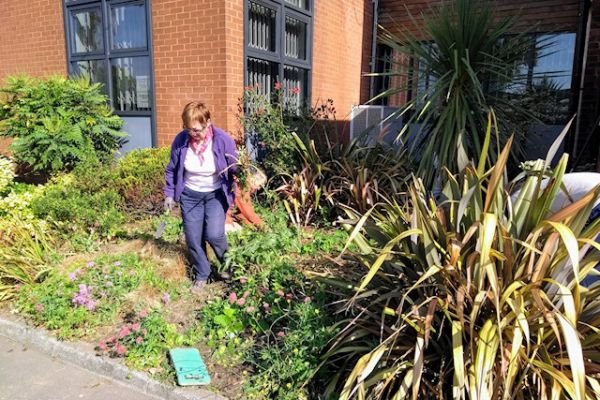 A little bit of painting touch-up makes all the difference! 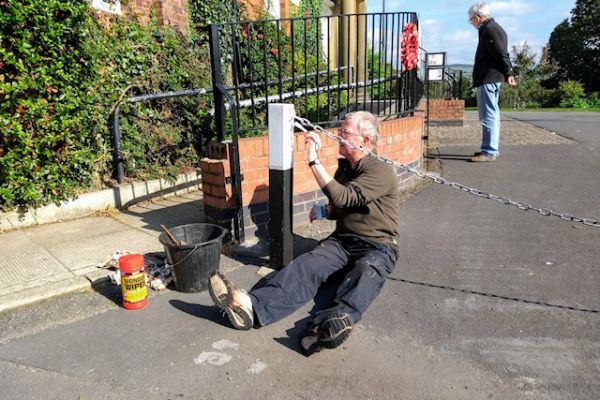